Kudos will once again be at Sound & Vision: The Bristol Show this year and, once again, we’ll be unveiling another world exclusive at the show: a preview prototype of our brand new Titan 505 stand-mount loudspeaker!

The 505 is the latest addition to our flagship Titan series, created to bring high-end performance to a wider range of budgets. The Titan 808 is of course our ultimate ‘top model’, from which trickle-down technology was then drawn to create two smaller and more affordable floorstanders, the Titan 707 and 606, both launched last year. Now, we’ve realised our additional goal of bringing the Titans’ soul-stirring musicality into a stand-mount speaker.

It’s something our chief designer Derek Gilligan has been passionate about ever since his earlier career as a live sound engineer. “You have to know how to make the whole crowd go wild,” he says, “not just the guy in the front row.” Now, as a loudspeaker designer and engineer, he translates that maxim into bringing that ‘go wild’ feeling to a wider range of music lovers at home, “because having a smaller space and/or budget shouldn’t mean you have to compromise on the sheer joy of your music.” 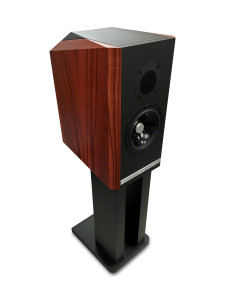 Based on the T606, the T505 features custom-designed SEAS-Kudos drivers, as well as the Titans’ trademark isobaric bass reflex design and complex cabinetry – all in a compact stand-mount model. In common with all of Kudos’ upper-end models, the Titan 505 also has the capability to run in active mode with high-end systems including Naim, Linn and Devialet, allowing a raft of performance-optimising options.

So, with all of that in mind, the Kudos room at this year’s Sound & Vision Show will focus on demonstrating that a modest yet high-quality system can deliver the musical goods in spades! The prototype of the new Titan 505 will be partnered with Naim’s Uniti Nova all-in-one player. Derek and the Kudos team will be on hand throughout the show to share thoughts and answer questions. So please come along, take a seat, listen in, have a chat. We’d love to meet you.

Join Kudos in Room 206 on the 2nd Floor of the Marriott City Centre Hotel in Bristol, from Friday 23rd to Sunday 25th February 2018.

Plus: to hear more of the Kudos range, visit Audioquest in room 202 who will be running a Linn Aktiv system with the Kudos T606, and Quadraspire in room 114 with the Kudos Super 10.