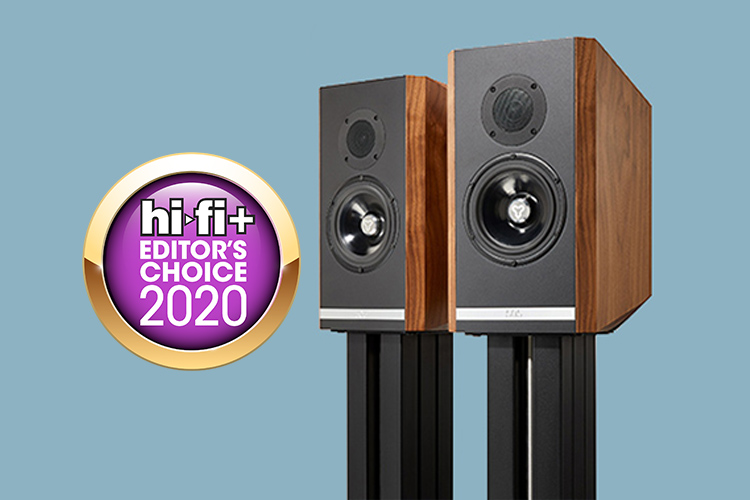 “The Kudos 505 comes from a race of Titans! It’s the smallest and lone standmount in a four-strong Titan range, all of which use the same basic profile; a rear-ported isobaric design, and all of them can be powered actively as well as basic passive operation.

The Titan 505 arguably lends itself to passive drive slightly better than its bigger brothers (by virtue of not having those bigger cones to move in the two largest models), and this is the ideal model for the listener in smaller rooms. Kudos uses SEAS drive units, custom made to Kudos specification; a 29mm K3 fabric dome tweeter, and two SEAS‑Kudos 180mm mid-bass units, made of double-coated paper cones, with a 39mm voice coil that uses a copper shorting ring, and an aluminum phase in the visible sample, the second being enclosed in the cabinet for that isobaric loading.

In our test, Alan Sircom felt that “The first and most obvious point of the Titan 505 is its bass. For a stand-mount loudspeaker and a loudspeaker of its size, the bass is prodigious. Not overpowering or overblown, just that ‘where did you hide the subwoofer’ bass power and drive.” He also observed that “the loudspeaker also has a dynamic range and shade far beyond that of most conventional two-way standmounts of similar size,” that “the treble is refined and extended too, without exaggeration or strong emphasis,“ and, “Stereo imagery and separation are outstanding too, although ‘outstanding’ set in the context of an ‘excellent’ performance elsewhere.

Finally, he summed the speaker up by saying, “Whether you view it as a stepping stone to active drive of a passive loudspeaker end in its own right, the Kudos Titan 505 is one of the most impressively well-balanced loudspeakers in its price and beyond.”